A New Experience. A New "U"

In recognizing the need to provide students with similar experiences across campuses, SU System has consolidated its multiple Banner Systems into a single, shared application that will result in a more efficient, consistent, and feature-rich student information system. The new consolidated platform with a common course catalog will enable students to move seamlessly between SU campuses.  Cross-admissions and registration processes like the SU Connect program will be simplified. The new interface between Banner and a newly consolidated Moodle LMS will provide seamless integration between the systems.  Common business processes will enable campuses to collaborate and develop new ideas that will propel the University forward.

The consolidation of the Banner system for all campuses is a significant step toward the realization of a long-term benefit for the SU System, along with significant savings due to economies of scale.  The much-anticipated SUS Consolidated Banner platform is coming soon.

Moving forward your new SUlogin, “FirstName.LastName@sus.edu” will be created for all students/faculty/staff. A notification email will be sent once the email accounts have been created and confirmed. This new login will be used for credentials to access BANNER, SUS email account, MOODLE, mySU mobile app, and the Wireless Network. All students/faculty/staff will continue to have access to their current campus email (@subr.edu, @susla.edu, @suno.edu, @sulc.edu) and will receive their local campus communications via this email.

Inside BANNER SSB Students, Faculty, and Staff may create/update any of the accounts listed below if needed:

All other email accounts will require official documentation to be modified or updated in the Banner System:

Before the consolidation of the Banner system, each institution maintained a unique Identification Number for students, employees, and vendors. For example:

A new system-generated number will be used as the primary identification number within the Southern University Consolidated Banner System. This new 9 digit numbers will begin with the letter "U" followed by 8 numerical digits. For example, a system-generated number would appear as U12345678. When transferring between SUS institutions no new entry for a person will be created regardless of location or module.

The old Identification Number has been retained as an "alternate ID". Lookup your new SUS ID and Login HERE.

Term codes have been restructured to allow each Southern University Campus to control registration and other important business processes. To achieve this, the code was revised to use numbers in the first position of the codes, identifying the campus within the SU System.

The new structure moves the academic year into the 2nd through 5th position.

The semester within the academic year is in the last position. Values range from 0-9 for semesters. When additional Summer Terms are scheduled, 6 or 7 will be used:

A new level code has been created as a means to distinguish students within the Southern University System Campuses. The code will start with the campus Identification number proceeded by a Level Identifier.

For more information and examples please review the following "Document".

To make these common courses more obvious to students, advisors, and faculty, the subject code was modified by adding an “S” as the first character (prepended).  The remainder of the code was modified to coincide with the LCCC abbreviations.

This pattern was followed for all courses that were mapped to LCCC courses for transferability within the State.  In general, courses at the advanced level, 300 or higher, did not have the subject code changed as described above.  However, if a 300 or higher-level course had an LCCC equivalent, the course number was changed to align with the LCCC.   Therefore you will see course number adjustments even at the 300 level or higher, but the subject code was not always revised as described above.

All other subjects that are not translated in the Louisiana Common Course Catalog have been converted using the previous subject code rubrics and had the numbers appended with the campus identifying character, as described in the next section. During course conversion, the course titles for each campus were retained.

These are the subjects that had course subjects and numbers re-aligned with the Lousiana Course Catalog:

The second significant identifier of a course in the catalog is the number.  In the consolidated system, all course numbers have been appended with a character that describes the campus/institution within the Southern University System*.

The character identifiers are:

*The Law Center courses did not require this modification since there are no LAW courses in any other locations.

In the case where a course number had previously contained an ending letter, such as for LAB, the L was retained and the campus identifier was added.  In this example BIOL 105 has a new number to align with the LCCC, so the subject code and number have changed:

For more information on the Course Subject and Number Changes, please review the following "Document".

Below is the new look for the SUS Ellucian Ethos Identity page. This page will be displayed when accessing any Banner 9 and Banner related products that require Single Sign-On (SSO) authentication. The SSO creates a "Token" that will expire within 30 minutes of inactivity. For a new token, users will need to log in using their credentials again. Users cannot create shortcuts or bookmarks to access any of the Banner 9 and Banner related products after logging in, because a unique "Token" is created with every access.

If you are trying to log in and you are receiving the display below you will need to clear the history of your internet browser. 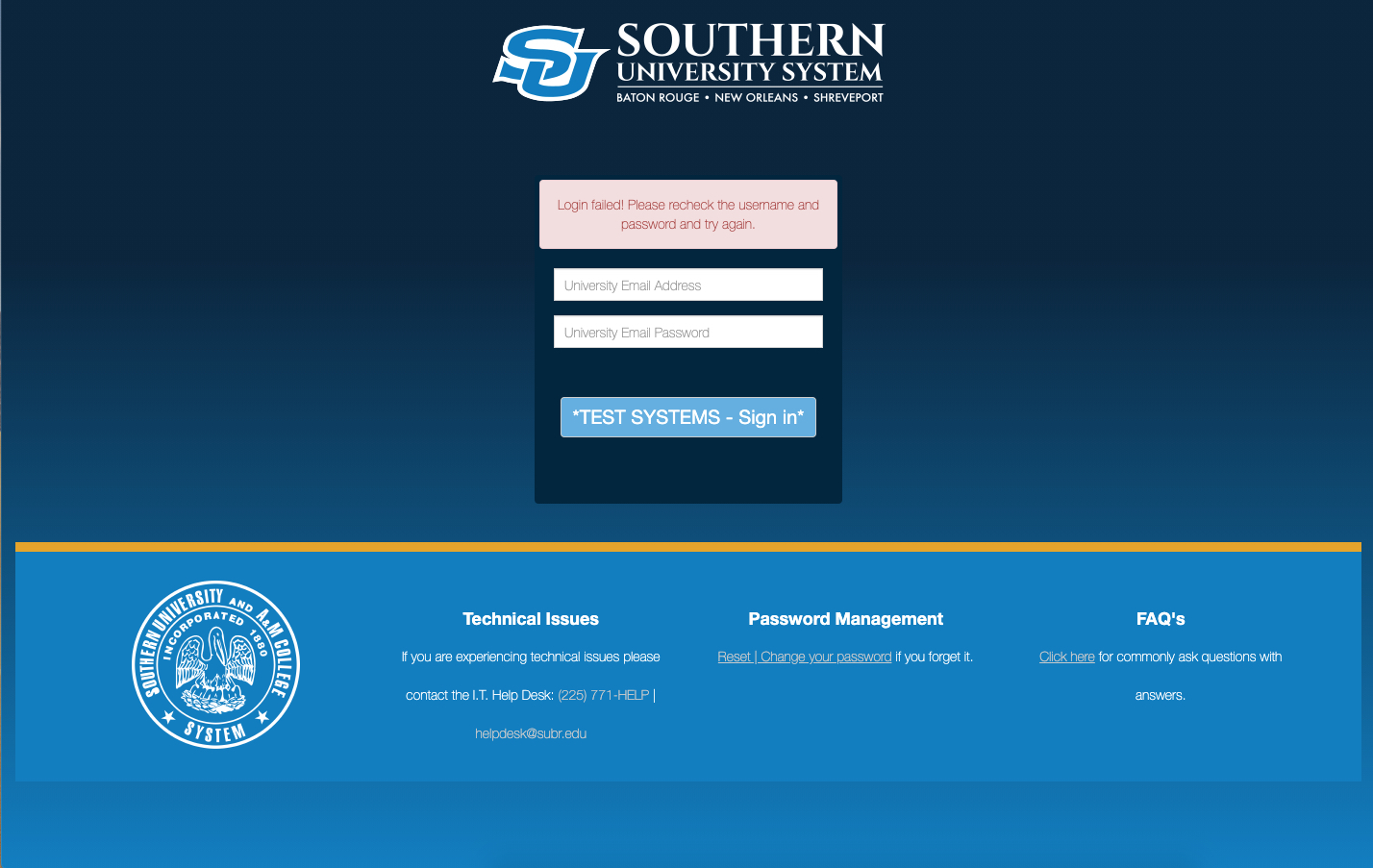 To clear the browser history please follow the instruction below.

The Recommended Modern Browsers for optimal use, functionality, and compatibility while accessing "Banner 9" are the following:

For more information on the browsers please review the following "Document"

The SU System has also consolidated Moodle, our e-learning management software. The platform is designed to provide educators, administrators, and learners with a single robust, secure and integrated system to create personalized learning.

The newly redesigned app will be available for the entire SU System. The app will bring information from the system to your hands. It will simplify the registration, accounting process and more. Available in Google Play and App Store. You can also access to download the app by visiting www.sus.edu/mysumobile .

SUS Password: "brow1234" or first four letters of your last name followed by the last four digits of your U-number.

A new universal help desk is now available to support all Southern University System campuses. In addition to Moodle and general IT support, the One-Stop Help Desk will assist students with admissions, registration, financial aid, student accounts, and other enrollment management inquiries.

For convenience & in the best interest of the time, this helpdesk has been implemented and has the following benefits: